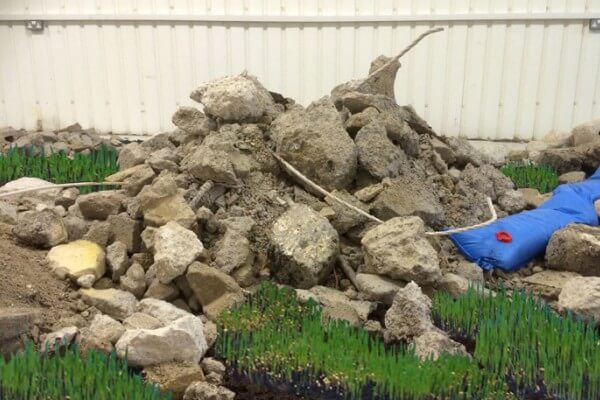 News May 16, 2016 - admin2020 Artist Rachael Champion creates landscape from demolition rubble
Rubble from a Brutalist Vauxhall icon is being used in an art installation as part of the Nine Elms on the South Bank Chelsea Fringe Festival.

A railway arch will be transformed into an artwork using rubble from the Keybridge House site, in South Lambeth Road which is part of the major regeneration of Nine Elms on the South Bank.

New York-born Rachael Champion’s sculptures and installations investigate the materiality of our built environment, challenging the dependant yet unclear relationship between humanity and the natural world.

The artist was commissioned to create New Spring Gardens in Arch 147, Newport Street, by Nine Elms on the South Bank with the support of the Vauxhall One Business Improvement District and property developers Mount Anvil and Fabrica. It will be one of the highlights of the Nine Elms on the South Bank Chelsea Fringe Festival, which runs from Saturday 21 May until Sunday 12 June.

The installation will also feature in the London Festival of Architecture programme, which is set to run throughout June.

New Spring Gardens is the original name for the nearby Vauxhall Pleasure Gardens. Jonathan Tyers, a property developer and art patron, established the garden as a cradle of modern painting and architecture, and a music venue, which was vital to the careers of composers Thomas Arne and Handel.

Co-chair and Leader of Wandsworth Council Ravi Govindia added: “Our aim is to make this rapidly changing area a new centre for arts and culture on London’s South Bank. Some truly world-class arts institutions have already moved in and we are adding to this with exciting commissions and events like Rachael Champion’s latest work.

The installation will be open to the public from 11am until 5pm on Thursdays to Sundays for the duration of Chelsea Fringe Festival.