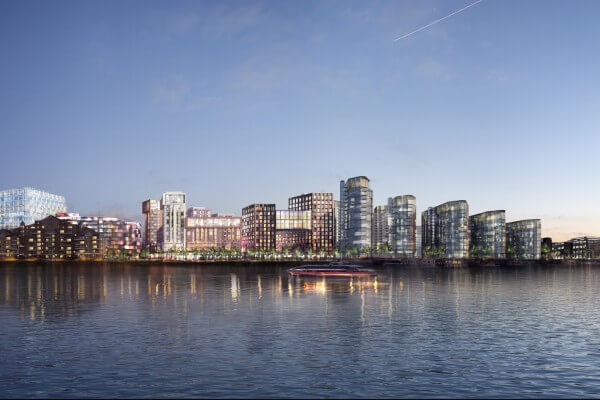 Cyclists now have a fully protected route through one of London’s most frightening gyratories and across Vauxhall Bridge after the Mayor officially opened the new Oval to Pimlico cycle superhighway.

The new continuous two-way and separated cycle lane runs for 1.4 kilometres, providing a safe cycle-friendly route for all ages and abilities through Vauxhall gyratory and across Vauxhall Bridge.

In the busiest peak hour, more than 750 cyclists are already using the new dedicated segregated lane which was opened three weeks ago.

This is a 29 per cent increase to the total number crossing the Vauxhall bridge in the same hour before the segregated cycle tracks were installed.

The number of extra cyclists using the segregated route is already the equivalent of taking 113 cars an hour off Vauxhall Bridge – in favour of a completely zero-pollution, zero-carbon, noise-free and space-efficient means of transport.

The new route also links into existing cycle routes through Kennington Oval and along Meadow Road by the Kia Oval, as well as the extensive network of back-street “Quietway” routes which are planned for Westminster and Lambeth.

Before the improvements, cyclists accounted for almost a quarter of rush-hour traffic through Vauxhall with around 580 in the busiest peak hour.

With the opening of the new route, the proportion of rush-hour traffic which is bikes has already risen to almost 40 per cent.

The Mayor of London, Boris Johnson MP, said: “We’ve brought a bit of Amsterdam to the unlikely environs of Vauxhall – opening up access to huge swathes of south London for safer cycling. I’ve always believed that more Londoners would cycle if they felt safer, and this new route already proves it.

“The astounding rises in cycling through Vauxhall should lay gently to rest any doubts about the need for my new superhighways, the pent-up demand in London for cycling – and the part my cycle lanes can play in taking other vehicles off our crowded streets.

“With London’s population growing by 10,000 a month, there are only two ways to keep traffic moving – build more roads, which is for the most part physically impossible, or encourage the use of vehicles, such as bikes, which better use the space on the roads we’ve already got.”

As part of the wider improvements, Transport for London (TfL) will next week consult on returning the Vauxhall gyratory to two-way traffic to further improve the area and create a safer environment for pedestrians and cyclists.

Leon Daniels, TfL’s Managing Director of Surface Transport, said: “Vauxhall is an area which will see tremendous change in the next decade, with the Nine Elms development, the Northern line extension and our wider plans to transform the Vauxhall Gyratory to two-way traffic. This new dedicated route through the area is the product of many years hard work by our designers, engineers and contractors. I would also like to thank local people for having borne with us while the work has taken place. This new, direct route will make cycling through the area safer for all.”

Lambeth Cllr Jennifer Brathwaite, Cabinet member for the Environment said: “Anything that encourages cycling in London by making it safer is to be welcomed. It’s better for our health, better for our city and better for the shared spaces in a city which, for too long, has been dominated by the car.”