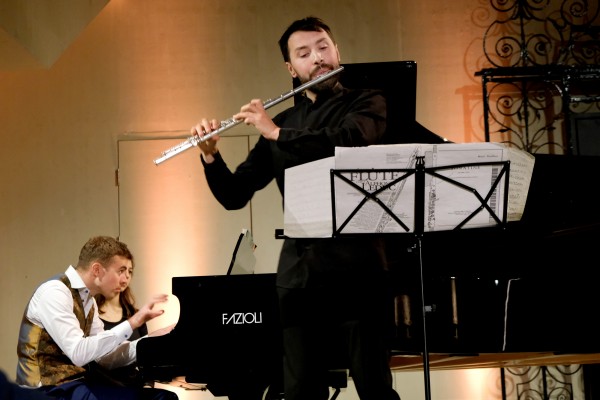 The events celebrated young and exciting artists, with lively performances taking place in unique and quirky venues across Vauxhall.

The series kicked off with an enchanting performance from string quartet Quatuor Zaide, with Classical Vauxhall’s festival director Fiachra Garvey, at St Peter’s Church. The beautiful building that dates back to the 1860s was beautifully lit for an atmospheric performance of Mozart, Webern and Franck to a packed out audience. The evening received great praise from David Nice at the Arts Desk, with a glowing 4 star review.

The second night starred critically acclaimed guitarist Sean Shibe at Brunswick House, a Georgian house nestled within modern Vauxhall, withstanding the change in the area since 1728. Shibe played a variety of solo guitar pieces ranging from the Renaissance period with a piece originally written for a lute, to a 20th-century classic work from Benjamin Britten.

The final night of the series featured flautist Adam Garvey, with pianist and festival director Fiachra Garvey, at the Garden Museum. The converted medieval church building provided a beautiful backdrop for the flute and piano duo, featuring the rarely heard Beethoven gem Serenade, as well as Dutilleux’s Sonatine and Prokofiev’s Sonata Op. 94.

In addition to the concert series, Classical Vauxhall included a school engagement programme, with performances from the London Philharmonic Orchestra at Wheatsheaf Hall of Rissmann and Gould’s Before the Firebird. These sessions introduced local school children to the joys of classical music, with an immersive orchestral experience allowing pupils to join in with lyrics and dance moves that accompanied the enthralling story of the Firebird.