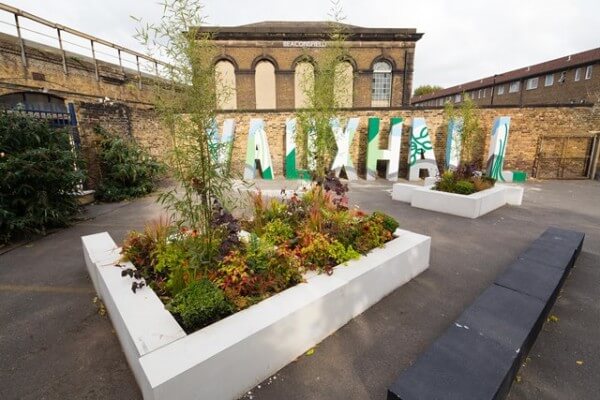 News October 20, 2015 - admin2020 Hepworth Inspired Garden relocated to Vauxhall
A Garden Exhibit put together by Rosie Irving and Vauxhall One

The Garden takes its inspiration from the textile designs of Barbara Hepworth – the Yorkshire born sculptor, and one of Britain’s greatest artists, who died 40 years ago, in 1975 – in particular a textile design for a tablemat produced by Cornish based design company Porthia Prints in the 1950’s.

Rosie came up with the idea for the garden design when visiting the London Fashion and Textile Museum last year, to see the exhibition ‘Artists’ Textiles’.

“All around me were beautiful bright fabrics designed by Pablo Picasso, Andy Warhol and Zandra Rhodes. In the corner, in stark contrast to the vibrant prints, was a small, monochromatic design that stopped me in my tracks. I was enthralled by the strong, geometric lines; the confidence and skill of the hand that had designed it. To me it was a brilliant example of less is more, where stark simplicity makes it impossible to hide bad design.”

“ It struck me that this could make a great garden, with the individual elements transformed into garden planters and seating areas”.

The garden was first seen in Vauxhall during Chelsea Fringe 2015 and then formed part of the major Barbara Hepworth Retrospective at Tate Britain where it was placed at the front lawn overlooking the Thames.

Haddonstone, world experts in cast stone, have transformed the design into a 3D form creating areas for planting and seating.

They are also selling them as part of their St Ives MODRO range, either as one whole piece or separately. The stone pieces have been made specifically for people to sit on and with different textures and heights to increase enjoyment of the Garden.

We’ve chosen large bamboos to give scale to the Garden in its setting on Newport Street as part of the new Vauxhall Gallery District and added deliciously tactile plants, scented leaves and swathes of autumn colour around the bamboos and shrubs.

This Garden Installation coincided with the first London Museum retrospective of Hepworth’s work for five decades, which opened at Tate Britain on 24th June 2015.

The exhibition highlighted the different contexts and spaces in which Hepworth presented her work, from the studio to the landscape.

Special thanks to the London Fire Brigade for the temporary pop-up use of the site for this super community garden.

Watch the re-location from outside Tate Britain to Vauxhall below. 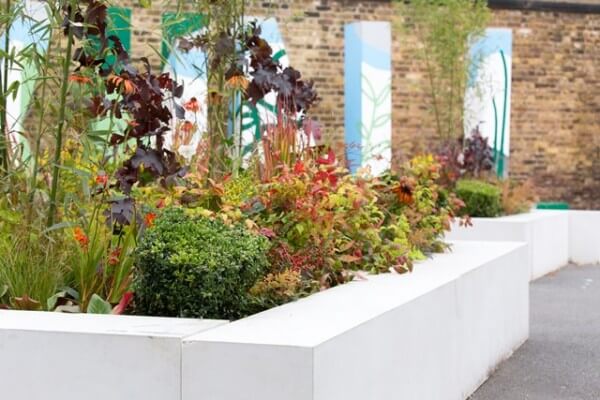