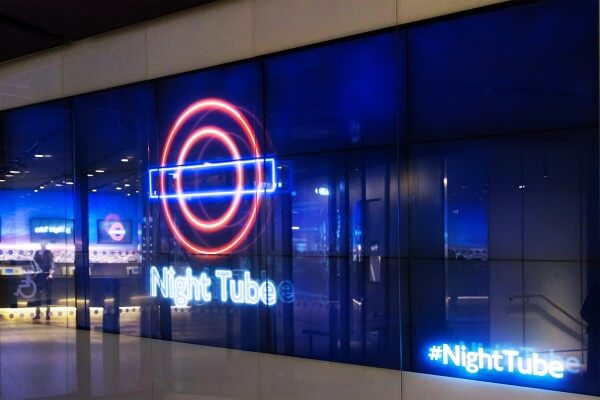 • Central and Victoria lines to go live first, with Piccadilly, Jubilee and Northern to follow in the autumn

• Around 2,000 permanent jobs for Londoners supported – boosting the economy by £360m

Hundreds of thousands of Londoners are set to benefit after the Mayor of London, Sadiq Khan, announced that the first all-night Tube services will run from 19 August on the Central and Victoria lines.

The Night Tube will mean 24-hour weekend services for the first time in London’s history, helping to cut night-time journeys by an average of 20 minutes, with some cut by more than an hour. It will play a vital role in opening up London’s night-time economy to a host of new opportunities, supporting around 2,000 permanent jobs and boosting London’s economy by £360m. It will help late-night revellers and shift-workers who currently have to rely on night buses or mini-cabs to get back to outer London after the Tube shuts down.

The start of Night Tube services on the Jubilee, Northern and Piccadilly lines will follow in two separate phases later in the autumn as new Tube drivers complete their training and final preparations are made. Around 200 part-time drivers are currently taking part in a 14-week training programme to make the Night Tube a reality. The Mayor of London, Sadiq Khan, said: “The Night Tube is absolutely vital to my plans to support and grow London’s night time economy – creating more jobs and opportunities for all Londoners.”

The constant delays under the previous Mayor let Londoners down badly. “I have made getting the Night Tube up and running a priority, and London Underground has now confirmed that services on the first two lines will launch on 19 August.” Demand for night-time travel is on the rise. Late night Tube usage is increasing at double the rate of daytime trips and demand for travel on night buses has risen by over 170 per cent since 2000.

To meet the expected demand for Night Tube services, there will be six trains per hour through central London on all Night Tube lines between 0030 and 0530. This will rise to eight trains per hour on the Northern line to meet demand at busy stations between Leicester Square and Camden Town.

London will join just a handful of other international cities, including New York and Berlin, which also provide metro services through the night. Independent research into the economic benefits of the Night Tube has found that the new service will help maintain London’s status as a vibrant and exciting place to live in, work in and visit.

London’s Transport Commissioner, Mike Brown, said: “It is good news for London that the first ever all-night Tube service will be ready on 19 August. More than half a million people use the Tube after 10pm on Fridays and Saturdays, and the introduction of the Night Tube, which will support London’s businesses and jobs, is a historic step in our modernisation of the Underground and our work to support London’s economic growth.”

Introducing a Night Tube service forms part of a major programme to modernise the Tube with stations, trains, track and signalling being updated or replaced to provide more capacity for a growing city.

Redevelopment work to increase capacity at key stations, and to make them step-free, is underway at a number of stations including Victoria, Tottenham Court Road and Bond Street. More than half of London Underground’s 270 stations have now been modernised or refurbished to make them brighter and easier to use, with improvements such as tactile strips, better CCTV and help points, electronic information displays in ticket halls and on platforms, and improved seating and lighting.