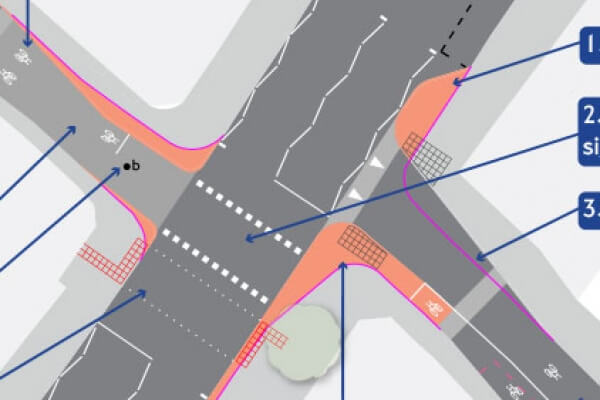 The junction is on one of the first two pilot routes of the Quietways and TfL would like to know what you think about the proposals.

The Quietways will deliver a pan-London network of high quality, well signed cycle routes predominately using back streets with little traffic. They are designed to overcome barriers to cycling, targeting less confident cyclists and those who prefer a more relaxed journey. Quietways will complement other cycling initiatives, such as the Central London Cycling Grid and Cycle Superhighways.

The Tower Bridge Road junction with Rothsay Street and Webb Street is part of TfL’s road network and is on the Inner Ring Road. The junction also forms part of the proposed route of the Waterloo to Greenwich Quietway, which runs across Tower Bridge Road, between Rothsay Street to Webb Street. In July 2014 LB Southwark (LBS) undertook consultation on their proposals for this section of the route on the roads that it maintains.

This TfL consultation proposes the closure of Rothsay Street from Tower Bridge Road to all traffic except cycles and emergency vehicles. These changes will provide more space and a better level of service for cyclists and pedestrians. Access to and from Tower Bridge Road will be maintained for local traffic via Alice Street and Green Walk.

How can I find out more?

To view our proposals and have your say, please to go directly to the consultation here:

The consultation closes on Thursday 26 February 2015.

The Quietways form a key part of the Mayor’s Vision for Cycling; a 10 year plan to deliver cycling improvements across the Capital. By 2022, £913m will be invested in cycling and we envisage over £123m to be allocated to the Quietways programme.