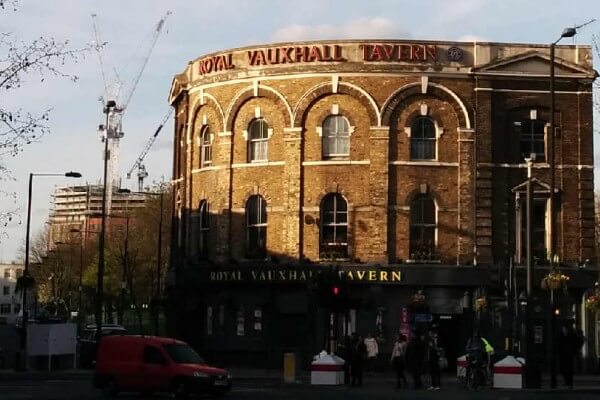 News April 20, 2015 - admin2020 Stars of gay London launch bid to save the Royal Vauxhall Tavern
BAFTA winning writer Stephen Beresford is among those backing performers and punters of the iconic Royal Vauxhall Tavern in a new campaign to safeguard its future, following its recent sale to property developers.

The launch of the campaign comes in the wake of the shocking closure without notice of the Black Cap in Camden, another venerable London LGBTQ venue.

Stars of Duckie – the RVT’s biggest weekly crowd puller – and the legendary performer David Hoyle are among those leading the campaign to save the Tavern. Rob Holley, who runs the venue’s popular Push the Button night, is also on board.

The RVT is believed to be the UK’s longest running LGBTQ venue and recently featured in Beresford’s hit film Pride. A haven before decriminalisation, and a crucial hub during the AIDS crisis, the RVT is today a thriving site of culture, performance and community in South London.

But since buying up the Tavern in October, new owners Immovate – an Austrian property company – have repeatedly declined to reveal their intentions, or even guarantee the venue’s long-term future as a LGBTQ bar.

The continuing uncertainty has fuelled fears that the Tavern will be closed or transformed out of step with its unique history.

That has spurred some of the RVT’s most successful acts to join forces with concerned regulars and take things in to their own hands.

RVT Future is the most high profile of several recent campaigns to date to save well-known London LGBTQ venues that have fallen victim to London’s over-heated property market.

The campaign is seeking to:

The group is asking concerned members of the public to sign up to its campaign on its website, www.rvt.community.

“The RVT is so much more than just a bar. As Pride shows, it has a special role in LGBTQ history and London life; a unique place where different communities can come together. “The RVT has always stood out as embodying the true spirit of the LGBTQ movement and it would be a real shame if it lost touch with that heritage. I support the campaign and wish it all the best.”

Push the Button’s Rob Holley, who is involved in the campaign, said:

“The RVT has a very special place in the hearts of the LGBTQ community. For decades its anarchic and colourful nights have brought much needed character to the scene. London life would simply be far poorer without it.”

“This campaign is simply about getting everyone who cares about the Tavern’s future together to play a role in securing it. “There is no reason the RVT can’t be a successful, modern and profitable bar while staying true to its traditions. We hope the new owners will now move to provide the peace of mind locals, regulars and performers desperately want.”

RVT Future will hold a free launch event at the Cinema Museum in Kennington (2 Dugard Way, London SE11 4TH) at 7pm on Sunday April 26, including a screening of the documentary Save The Tavern, recently screened at BFI Flare.