Update on the Vauxhall Cross Gyratory and statement from Vauxhall One 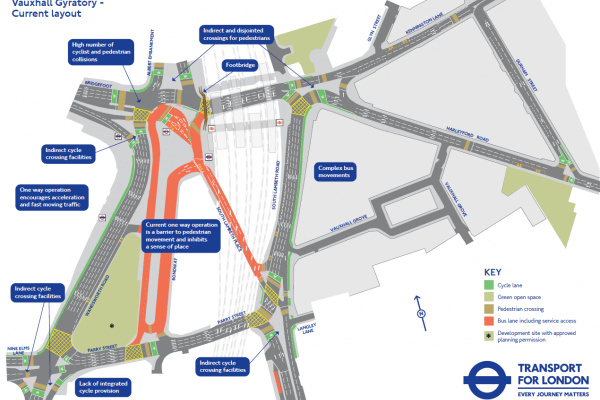 The full consultation report is available to download here.

You can read the statement by George Foster, Chair of Vauxhall One, below.

TfL consulted stakeholders including the London boroughs of Lambeth, Wandsworth and Southwark and the City of Westminster. They also consulted the MET traffic police, London TravelWatch, Members of Parliament, Assembly Members and local interest, transport and business groups including developers and landowners.

The questions were structured to provide TfL with an understanding of the level of support for proposals, to help identify any specific local issues and to understand how respondents used the gyratory. This consultation covered only the general principles of the scheme and as a result didn’t include detailed plans or journey time impacts.

The responses have been positive with broad support demonstrated. For example:

The next stage of consultation on the more detailed aspects of the design will be carried out later this year.

‘Our conversations with businesses often focus on the Vauxhall gyratory system, and its lamentable effect on the character of the area and the physical health of their employees. We applaud the efforts of Lambeth Council and Transport for London to remove the gyratory and replace it with something that creates a far better environment for pedestrians and cyclists, inviting people in rather than pushing them out.

We believe that there is now an opportunity to deliver a proper town centre for Vauxhall – a place that offers new retail, leisure and amenities for the whole community, together with new office accommodation for our member businesses as they grow. ‘We are pleased to see the first consultation on the principles of the scheme has indicated broad support.

However we urge Lambeth Council and Transport for London to give serious consideration to more far-reaching options for the scheme, including that generated by local residents. This seeks to remove traffic from the South Lambeth Road section of the gyratory and to ‘green’ it as part of the green trail that includes our own ‘Missing Link’ public realm improvements.

We look forward to working with Lambeth and Transport for London in this next phase of consultation to ensure the best outcome. Specifically we intend to survey our member businesses and their employees to ascertain in detail what they want from the new scheme.’