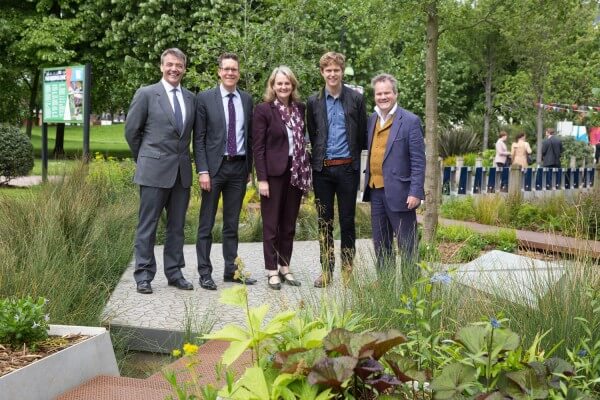 News May 19, 2015 - admin2020 Missing Link launches in Vauxhall
Lib Peck, the Leader of Lambeth Council cut the ribbon to declare the Vauxhall Missing Link open on Friday 15th May.

Lib was accompanied by Ben Plowden, a main board director of TfL, who sponsored the project, as well as Royal Bank of Canada CEO, Dave Thomas, who sponsored the Hugo Bugg garden, relocated from Chelsea, after being awarded the youngest ever gold medal for a main show garden.

“We are delighted to have worked with Lambeth Council and Vauxhall One on this fantastic project which will transform this part of Vauxhall. This is part of our commitment to invest in and improving cycling and walking routes, as well as projects that help transform London’s public spaces and improve air quality.”

In 2013 Vauxhall One, The Business Improvement District for Vauxhall, ran an Urban Design Competition with RIBA and the Landscape Institute for sustainable ways to improve the public realm and connectivity in the Lambeth section of Nine Elms on the South Bank

The competition gained a staggering 200 entries from 21 different countries all over the world. Erect Architecture with J&L Gibbons Landscape Architects were chosen as the unanimous winners for their outstanding entry ‘The Vauxhall Promenade of Curiosities’. This super project proposed a sustainable Green Trail that connected Vauxhall’s parks and new developments to the South Bank using a planted walkway.

The proposals were featured on the ITN 6 o’clock news on Monday 8th April 2013.

As part of TfL and The Mayor’s Pocket Park programme, both these schemes use an ingenious Sustainable Urban Drainage system (SUDs) that reduces the risk of flooding by taking rainwater from the street drains and re-directing it into lovely planted rain gardens.

The RBC Waterscape Garden was transplanted to Vauxhall in the summer and autumn of 2014 and the Missing Link Rain Gardens are being planted on Vauxhall Walk, London SE11 5HL in March 2015 by the Horticultural Apprentices of the award winning, not-for profit organisation – Streetscape – that trains unemployed Lambeth young-people back into full time employment.

Not only does it look great, but it creates local jobs!

The first phase of the Vauxhall Missing Link was completed in April 2015 right next to the Hugo Bugg Garden on Vauxhall Walk SE11 5HL and declared open by Lib Peck on Friday 15th May 2015. 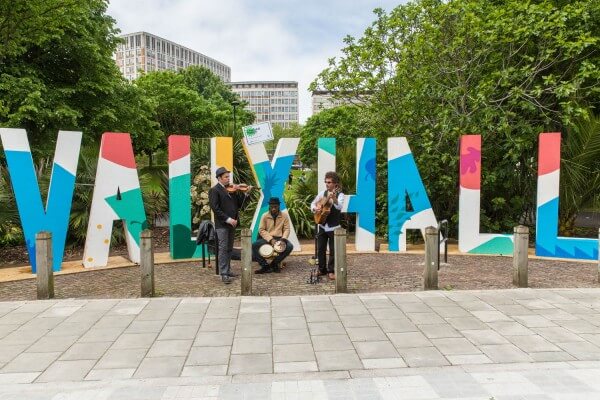