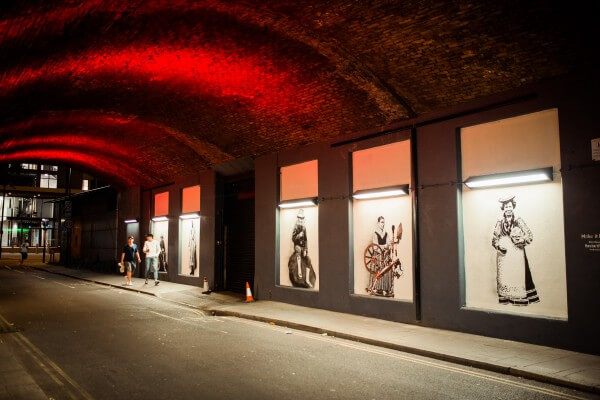 (R)estart Reality is a novel concept for art in public spaces that tells a story bridging the past and the present through creative technologies. Inspired by Estonia´s past, von Lõngus’s century-old characters travel through time and come to life with augmented reality, under the curious gaze of passers-by.

“At first sight hanging peacefully on the walls of South Lambeth Place and Glasshouse Walk in Vauxhall, our characters invite Londoners to get to know them,” Kadri Uus, Coordinator of (R)estart Reality and one of the founders of NOAR art platform in Estonia, explained, “Bringing them to life via your mobile phone is much fun. The best part of this project is to see the genuine surprise on people´s faces when the artworks start moving!”

You can meet, for example, Ats#Pets, electric bagpipe players, and Miina, who together with her husband Enn have been attacked by an anti-graffiti clean-up team in Tallinn, before they were shut up in an internet server due to a malfunction in a time-travel machine. Using a smartphone or tablet screen, they reveal their crazy stories full of humor and references to internet culture and Estonian history. The free (R)estart Reality app is available for download on the App Store or Google Play. Edward von Lõngus, Estonia´s most famous yet most mysterious street artist, is a fictional character, described as a mass of thoughts living in a database, without a body, but full of ideas.

The work of Edward von Lõngus is displayed in museums but can also be found on city dumpsters near these institutions. It has been hailed by National Geographic and The Guardian, which launched his international popularity. Some call him ‘the Estonian Banksy’, and others have promised to teach him a good lesson if they catch him one day. With his admirers and detractors, this artist is regularly apprehended by law enforcement, all while being named artist of the year in Tartu, his hometown.

Von Lõngus´s augmented reality artworks are brought to London in collaboration with London Festival of Architecture and Vauxhall One, a non-profit organisation focused on development of Vauxhall as a vibrant place for living and working. (R)estart Reality is an innovative art project implemented by Estonian contemporary art platform NOAR.eu as part of the Estonia 100 international programme. See more about (R)estart Reality and get the app at www.restartreality.org. To get to know more about Estonia and the programme of it´s 100 anniversary celebrations, visit www.events.estonia.ee

The BID has worked with the London Festival of Architecture for the last five years and this is one of my favourite projects so far, I am a firm believer that street art can really enhance an area and help create a sense of place, just look at Berlin or Wood Street in Walthamstow. It is also great to be part of a project that spans across Europe and will remain in Vauxhall to continue to intrigue passers-by after the end of the festival.