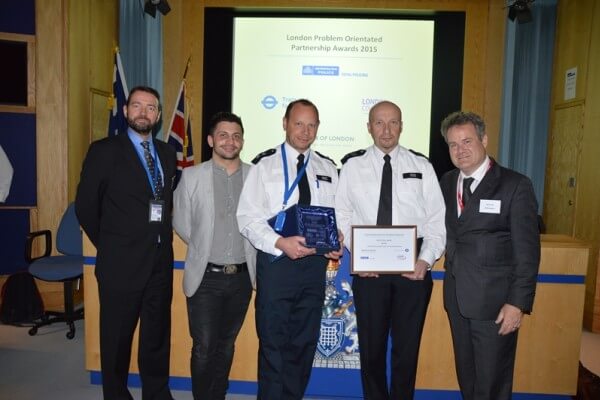 The awards celebrate initiatives that develop a partnership approach to problem solving – in essence projects that are responsive to local needs and address the causes of crime, not just the consequences.

The nominated projects are conceived and put into practice in partnership by the police, local organisations such as Vauxhall One and the wider community.

Vauxhall’s entry, entitled ‘turning Vauxhall purple’, focused on the improvements made in Vauxhall, especially around the transport interchange, over the past year.

In an award ceremony held at New Scotland Yard ‘Turning Vauxhall Purple’ won bronze in the Safer Travel category, which rewards partnerships that have improved the safety and security of transport and travelling in London.

Cllr Lib Peck Leader of Lambeth Borough Council and London Councils’ executive member for crime and policing, said: “London Councils is pleased to once again support the London Problem Orientated Partnership Awards, which have been an important part of local policing for the last decade.

“These awards recognise the very best local policing solutions, which understand the needs of local people and work with them and a range of partners to make a tangible improvement in people’s lives.”

Chief Inspector, Roy Smith said: “Winning this POP Award is a great achievement for Vauxhall, as it truly celebrates the behind-the-scenes partnership work of a number of different organisations, not only the Safer Travel and Safer Neighbourhood Policing teams, but also the involvement of the local business community, fostered by Vauxhall One, as well as the efforts of TfL and Lambeth Council. Together we will continue to reduce crime and help to make Vauxhall a safer place.”